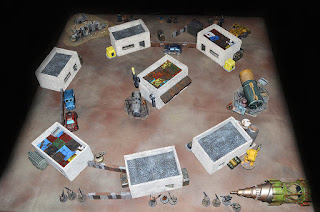 Despite being situated smack dab in the middle of the galaxy at the crossroads of numerous trade lanes the Misery Cluster was considered a bit of a backwater.  Home to numerous agricultural worlds and mining operations the worlds of the cluster are home to numerous tiny settlements with only a few larger cities.  One such outpost is "Lonely Jack's" situated on a small moon orbiting a gas giant of Johnson's Star.
The mercenary crew of the "Hellhound" and the spacer crew of the "Cometary Blaze" have both been invited to bid on some valuable data and other goods but instead of the smugglers they were expecting the town had been taken over by the Bloodborn pirates.  Instead of a bidding war a desperate shootout breaks out. 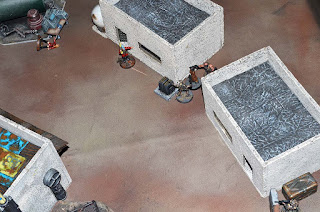 One of the Pirate ruffians is taken out early as the crew move in.  Another of the "Bloodborn" rushes into the streets and fires at the captain of the "Hellhound" crew but misses. 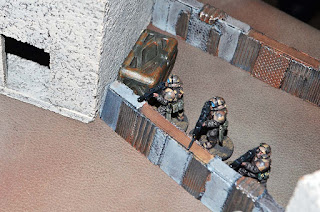 More "Hellhound" crew members move into the outpost talking up a strong position behind a wall with their carbines laying down covering fire. 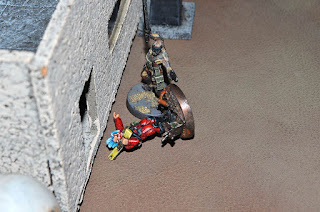 Viper Eyes captain of the "Hellhound" crew cuts down a pirate quickly and efficiently before the drunken bastard can get any more shots off. 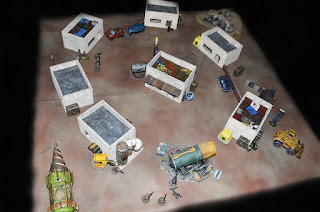 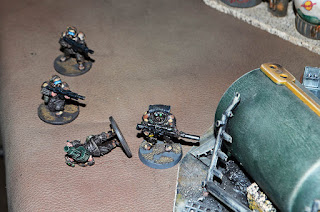 Angel the first mate of the "Hellhound" advances to cover their stunned Grenadier.  The manage to shoot and stun the Pathfinder that injured their comrade. 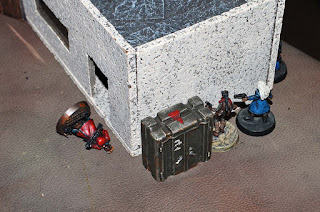 Moving from building to building to avoid the carbine fire of the mercenaries some of the spacers move in on a location they believe has some data to be retrieved. 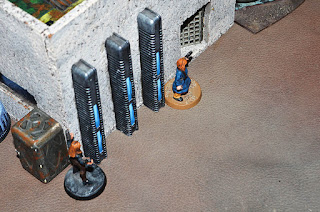 Two more crewmen of the "Cometary Blaze" move in on the communication station where the deal for the data was to take place. 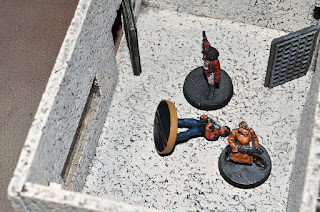 Two spacers drag their crewmember into a nearby building after the Pathfinder was shot by Angel and his mercenary comrades. 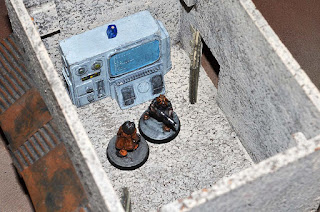 Kole of the "Cometary Blaze" and Velma of the "Hellhound" surprise each other inside the com station where they were suppose to meet up with the hacker who offered both crews the data. 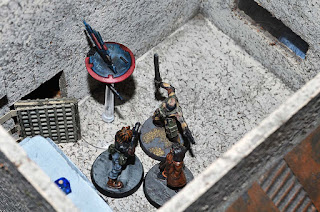 Responding to Velma's distress call Viper Eyes burst into the com station and attack Kole.  The Tekker first mate manages to deploy a drone but get's cut up pretty bad by the mercenary captain. 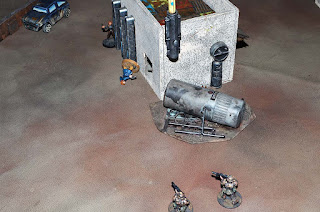 Another spacer is dropped by the accurate fire of mercenary carbines.  Lying unmoving in dirt it doesn't look like he will be making it back to his ship. 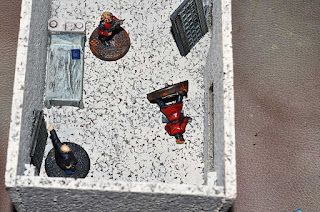 A Code Breaker from the "Cometary Blaze" enters the clinic to retrieve some data and kills one of the pirates wounded by the mercenaries.  However another pirate guards the clinic. 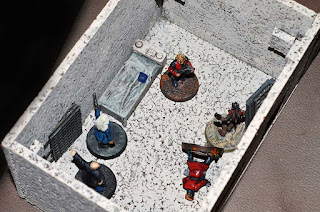 More crewmen of the "Blaze" enter the clinic and a shootout ensues over the medical data stored there. 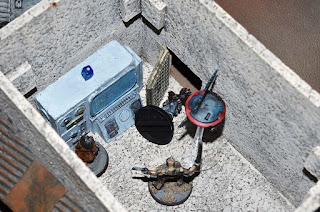 With Cole stunned Velma is able to download the data in the communication station's main computer. 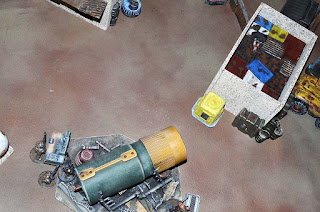 Angel and his troopers secure another data station and download it's contents for the mercenaries after taking out a crewmember from the opposing crew. 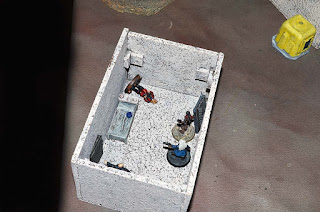 The spacer's manages to secure a recipe for combat drugs from the clinic's medical computer. 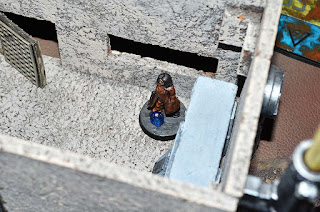 Instead of downloading the data that the crews were looking for Velma manages to download a fat stack of credits instead. 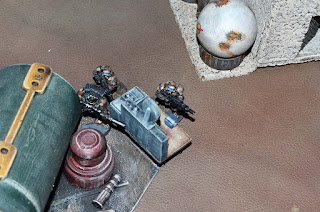 After driving the spacers into cover Angel and his mercs are able to easily download data from the salvage station computer. 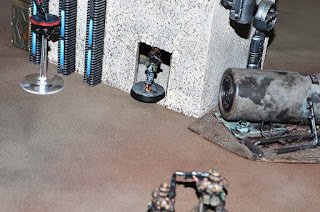 Things were not looking great for the spacer crew of the "Cometary Blaze" so they decided to bug out with their stolen data.  The mercs managed to gather the rest of the loot before heading back to their ship with no real casualties.
All in all the day went better for the mercs than the spacers but neither crew got away empty handed.

Posted by Ironworker at 7:44 AM

This is one of my favourite scenario's and tough to grab the centre treasure and get off.
Cheers
Stu

Links to some of my favorite sites.

Some of my favorite Companies